The day after Race For Life

jessica J
13:13 14 Jun 22
After years of feeling self conscious about my teeth, i finally decided to do something about it. Really glad i found Cathedral Dental. Friendly and professional service. Just completed my Invisalign treatment. Would highly recommend!

John Clark
11:01 09 Jun 22
Just had my first appointment with Amy and had a great experience. She was welcoming and very thorough asking me if I was comfortable at every stage of the appointment. She also gave good advice on using the correct size of inter- dental brushes. Ably assisted by Sophie. Cathedral dental is lucky to have two excellent hygienists in Amy and Monica

Jackie Bolton
12:35 17 May 22
From someone who has been scared of dentists for many years my experience with Amy and Lou exceeded my expectations. Amy spent time explaining things to me and made me feel comfortable and Lou also reassured me. Thank you so much for making the visit so much better than expected.

Judith Pugh
18:50 31 Mar 22
Thanks to Amy and Louise! They made me feel totally at ease. We had a giggle through the whole hygienist appointment and they did a great job on my teeth! Thank you!

Sarah
13:10 30 Mar 22
I have been a patient of Cathedral clinic for many years and I always recommend this clinic to friends and family. My new dentist João is very kind and gentle, the girls are always friendly and welcoming too. Thanks to all - very happy with the service.

Francesca Nichols
16:07 23 Mar 22
Joao and Kym are so kind, and comforting, walked me through every step so I knew what was happening. Very quick and accommodating; reception are great too.

Lynsey C
11:57 21 Mar 22
Best Dentist in town!I can’t take time off work & they offer late appointments and weekends. They use a lot of the latest technology and I always feel in safe hands.Thank you Indy and team!!!

K Garon
15:01 16 Mar 22
I had been to many other practices to find about Ivisalign, and did not have good experiences. I came to this dentist and was treated more like a friend than a customer by the lovely ladies which made me feel relaxed. There was no pressure to buy anything and the treatment options were explained in lots of details, I will be going ahead and excited to see my new smile :DD Really really lovely ladies! Recommend! xx

Sandra Usher - PSR Legal & SKINTONE Solutions
16:17 27 Dec 21
Just completed the implant process with Ricardo at # Cathedral Dentist 🦷- it was actually very enjoyable and I have 2 perfect teeth back again. They are very comfortable and feel like my own. Highly recommend and well worth investment. Thank you 😊

David du Plessis
21:17 28 Nov 21
Never had trouble booking appointments, everyone always very helpful and friendly, been coming for years. Service is top quality and I never come away feeling unhappy with the treatment. Would recommend.

Berry English
15:15 27 Oct 21
I chipped my front tooth just over 12 years ago and this is the 4th time I've had to have it replaced (1st time at Cathedral). Ricardo did a wonderful job, very meticulous, took great pride in getting it to look right. He also got to the bottom of why I kept wearing it away / off - through grinding in my sleep, so a sleep guard has also been sorted. Would highly recommend

Mark Cordell
14:37 25 Oct 21
As usual excellent service & care from my dentist, Indy Singh & his colleagues. Unbelievably I contacted the practice on Friday as I had a problem & was able to be seen two days later.Reassured by Indy that all was well & that no treatment was required. I would wholeheartedly recommend the Cathedral Dental Practice!

Isabelle Glen
11:33 21 Oct 21
Cathedral Dental are amazing! Dentists that really know what they’re doing and can guide you in the right direction. Always try to accommodate appointments where they can, offer a massive range of services and truly care about their work. I personally can’t wait to see my finished smile once my invisilgn treatment is done - really life changing for confidence! If you’re looking for a dental practise to help improve your teeth and not just do the bare minimum, then this is the right place for you. Also offer finance plans tailored to you so no goal is out of range!

giselle roadley-battin
09:56 15 Oct 21
excellent customer care, the reception staff are always helpful and they listen which is a lovely quality and very rare.The treatment you recieve is attentive, they explain what they going do, and how they going to do it stage by stage.plus we must not forget the after care that is100%

Alexandra Braga
18:04 12 Oct 21
What a lovely team. Dr Ricardo and dental nurse Kim, were fantastic. Caring, compassionate and gave me the time to ask questions and made me feel heard. During the planned procedure they were reassuring and very efficient.Would definitely recommend them. Thank you so much. Alex

Alexandra Smith
12:28 29 Sep 21
I couldn’t recommend Cathedral Dental enough. I’m mid way through my Invisalign treatment, and I’m so pleased with the result already, but more importantly the service! The team are so welcoming, and make me feel completely at ease. Thank you!
See All Reviews Write a review

The day after Race For Life

It is the day after the race and the team are in major recovery! We all ache from head to toe and are going to be sending Indy to buy copious amounts of cake throughout the week to get us through!

It was a really hot day (exactly what we didn’t want) and the going was pretty tough. There was a point just before half way when I really thought I wasn’t going to manage it. My legs were so sore! The ground was very uneven in places and in some parts of the route the grass wasn’t cut that short so it made running that little bit harder. Once we had passed the halfway point though, it seemed to get easier – I think we had just run through our pain, and mentally knowing that we had made it half way round pushed us on to the finish.

We didn’t run very fast, conserving out energy as much as we could and when the sun was directly beating down on our heads we stopped and walked for a few minutes at a time. If we hadn’t been trying to make it round a 10k race it would have been a really lovely day for a walk in Nowton Park!

We also ran out of water at around 7k and then I think we all had another moment of fear and felt ready to give up! I was gasping and saying to Mel “Water, is there somewhere we pass to get water?” and shaking my empty bottle at her as violently as I could given my serious lack of energy at this point. Just when it seemed there was no hope we came across one of our supporters (Mel’s brother) sitting at the side of the route cheering us on and he had LOTS of water in bottles! I don’t think I have ever been so deliriously happy to see anybody in my life, I could have spent the rest of the afternoon just telling them how grateful I was for that water at that time!

Once topped up with water, the last 3k seemed to go a lot quicker and felt much easier than the beginning of the race. We were all pumped up knowing we didn’t have far to go. When we saw the sign saying 9k we all started to jog a little bit quicker, and we all totally ran the last 500m. I nearly stopped before the finish line because I thought my lungs were actually going to explode and my legs were going to drop off, but I just managed to get my toe over the line before I started hobbling.

We were handed our medals and promptly all fell down on the grass very red in the face. We just managed to stand long enough to have a photo taken with our medals, which actually turned out to be a rather nice photo of all of us – surprising considering we were all sweating buckets and even smiling felt like it was taking considerable effort!

Our time was 1.5 hours and we were all massively happy with this! We have also just about hit our fundraising target which makes it all worth it. We will ache for the next week I am sure, but we wouldn’t change that. Running the Race For Life for Cancer Research was one of the most worthwhile things we have done so far, and we can’t wait to repeat it next year hopefully raising more money and beating our time!

Thank you to all our sponsors and everyone who came to support us on the day. We really appreciate it! 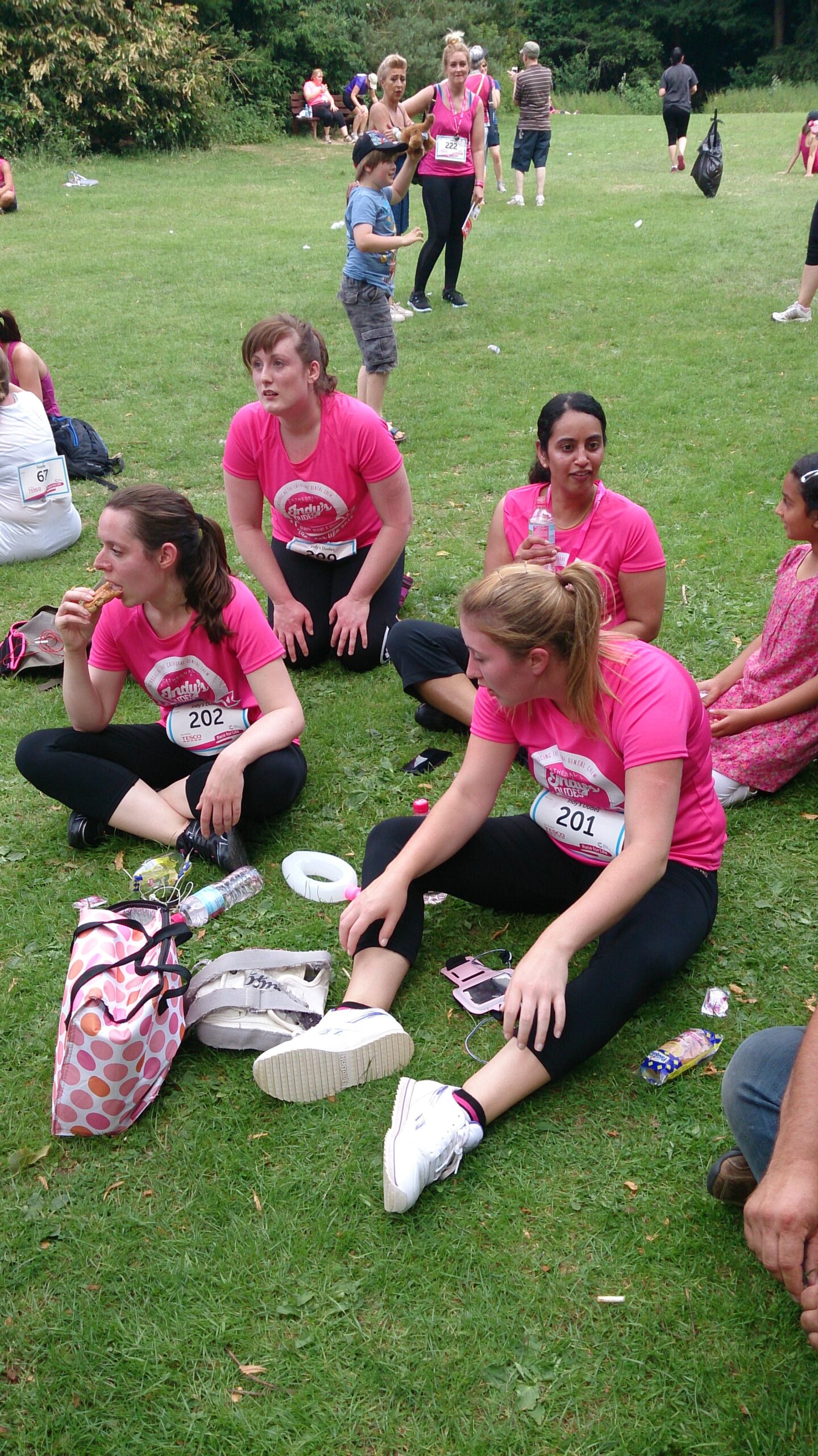 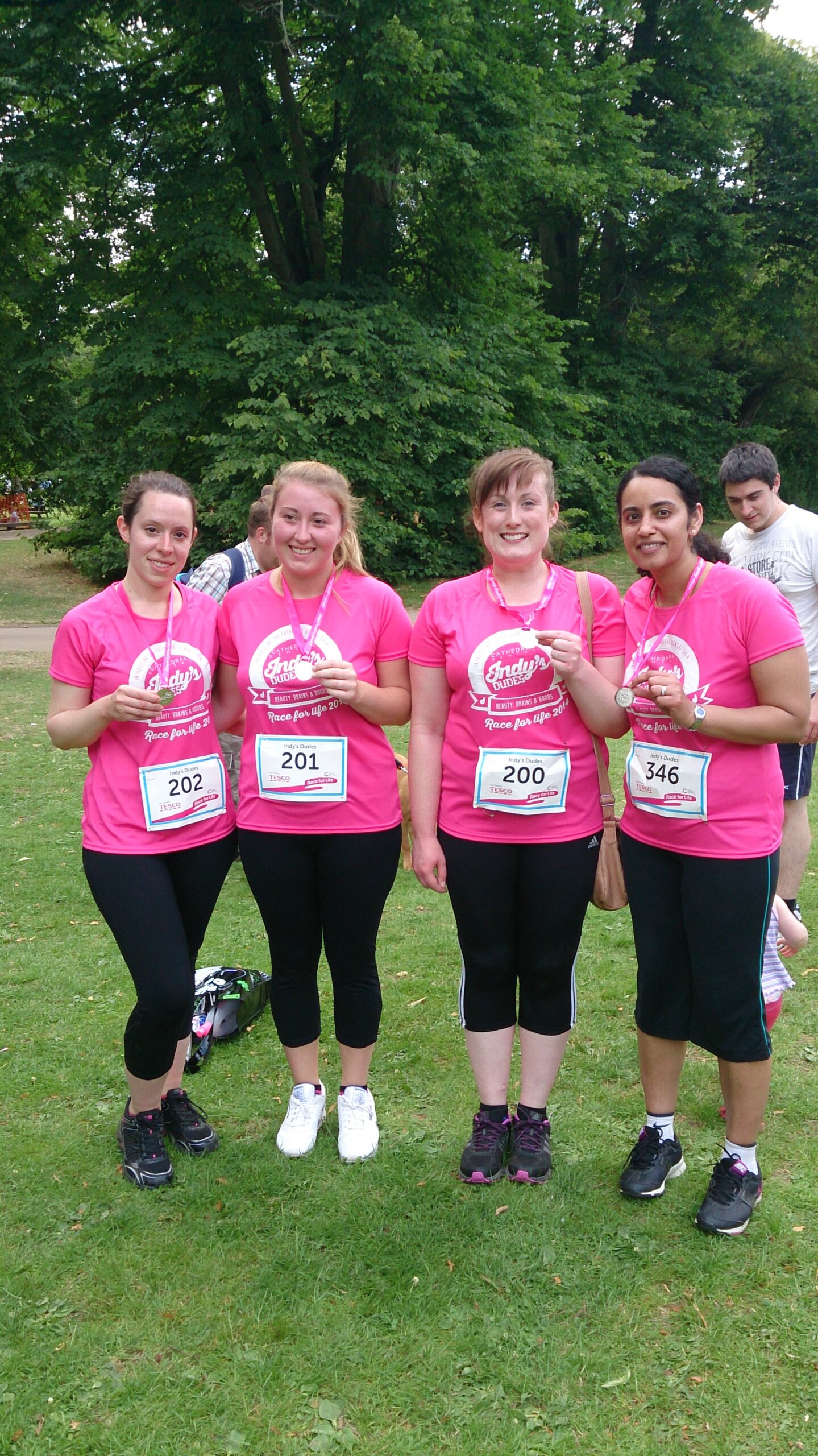 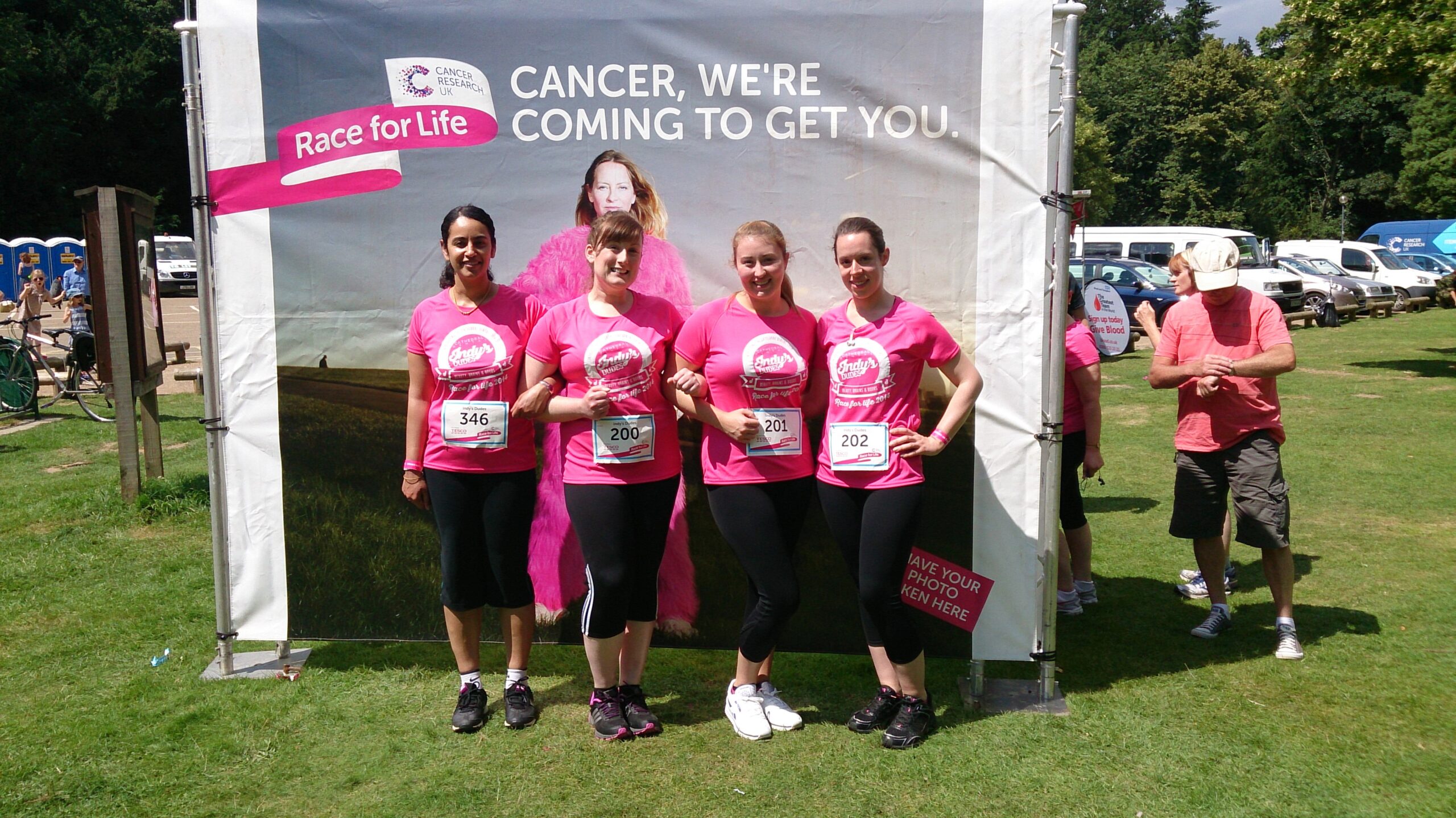